I have met countless Continuous Improvement and Operational Excellence professionals over the course of my career.  And, in turn, I have become acquainted with their roles and efforts in regards to driving value to their organizations. Oftentimes, these professionals, although possessing great passion for, and pride in, the value they drive to their companies, express their frustrations at the lack of proper support from their company in their efforts.

Interestingly – perhaps even tellingly – although almost all of them consider themselves and their efforts “strategic” to the company, very few of them actually are.

First, you need to know “what is Company Vision”.  This is not to be confused with a “mission statement”, which is so often peppered with platitudes and buzz-words such that it is mostly drivel – rather, this is a simple statement (a “vision statement”) with specific objectives to describe the “future state” of the company (or business unit). It might have to do with products, or market-share (even specific markets), or how the company might bring products to market, or even with regards to mergers and acquisitions (and the realization of the synergies expected). The objective here is to align the efforts towards the realization of this vision.

Next, you have to understand the importance of prioritization of these efforts. It is vital to understand that priorities, once set, should not change often (and only for very good reason). There is nothing that can diminish the results of these efforts more than resetting priorities and it is imperative to realize that not everything can be the “highest priority” – for if everything is a highest priority, then nothing is.

Finally, you need to gain real and substantive support for the efforts. This will only be possible if the executive leadership sees the efforts as facilitators of the company vision – and best if seen as accelerators of their realization. Here, it is important to understand that the single most critical responsibility of executive leadership is to achieve the vision for the company and anything that does not help in that effort is of secondary importance (at best) to them. Take the time, and make the effort, to understand what is of value to the executive leadership and align your efforts accordingly – then you will gain the support (and respect) you need.

For your consideration, I detailed the three maturity levels of Operational Excellence (or Continuous Improvement) efforts below and some of their characteristics. 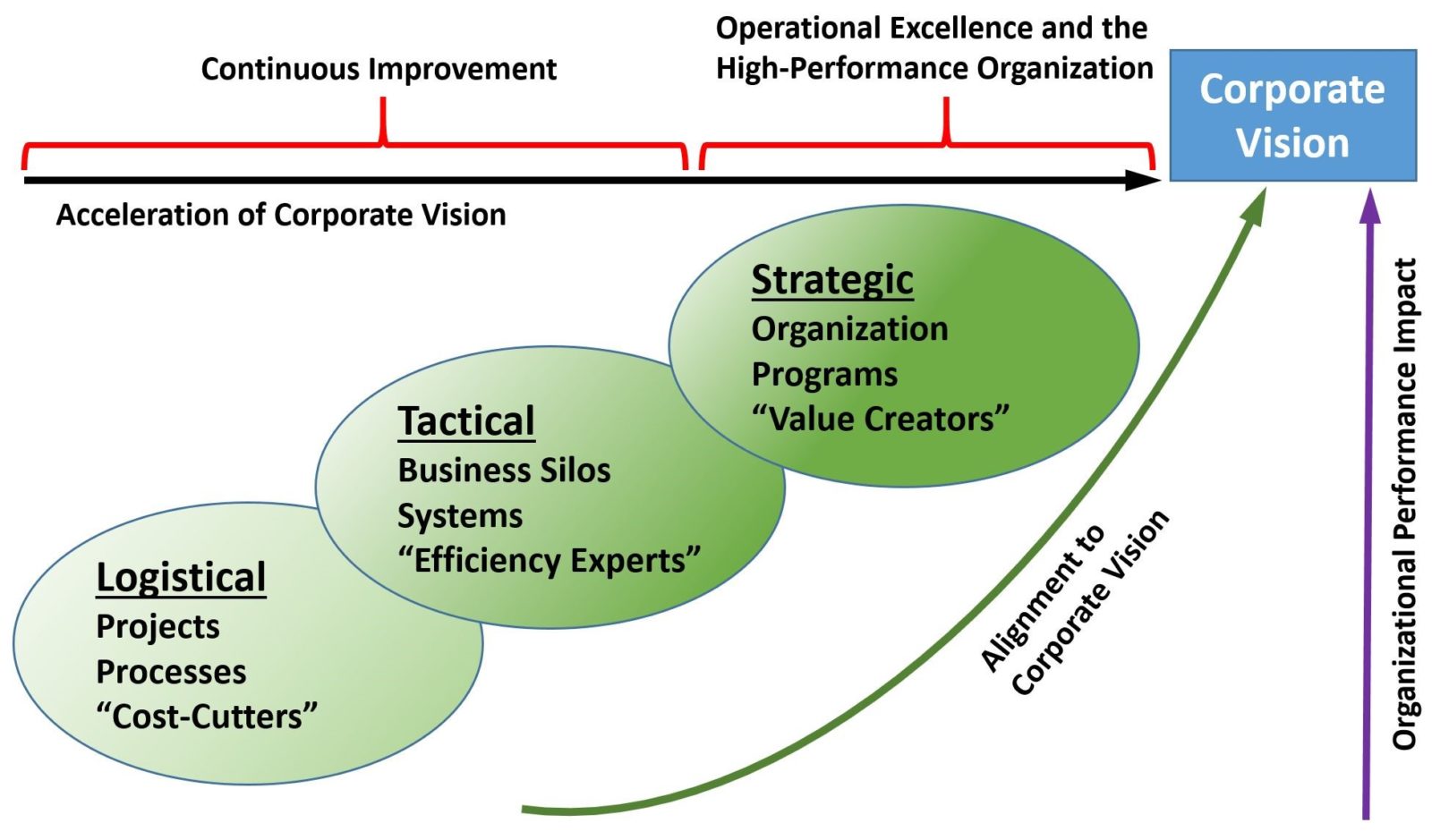 If you want the efforts to evolve from being Logistic or Tactic (Continuous Improvement), which is the present state of most efforts, to becoming Strategic (Operational Excellence), you need to align the efforts to the Corporate Vision – become an accelerant of that Corporate Vision. Take the time to learn what that is and to build your allegiances (and alliances) towards that.

Start looking at the “big-picture”. Don’t look at your shoes, look down the road. Evolve your perspective from processes, to systems, to organization. Consider the impact of your efforts on the entirety. Seek to create an organization that works at an optimal state where all the efforts are working in a balanced and harmonic manner. Cut across the business silos and create cross-functional integrations and the related communication and collaboration protocols.

Work to accelerating the decision-making process. Learn to see the opportunities and threats more quickly and to configure and deploy an effective and thorough response more rapidly and decisively. Here, openness and understanding the capabilities and capacity of the resources available (and also the weaknesses) are of critical importance.

Work towards achieving all of this and you will gain a level of Operational Excellence and become the High-Performance Organization.

Joseph is a thought-leader on the subject of Operational Excellence, a prolific writer and sought-after speaker from around the world on all aspects of the field. Although an expert in the more granular facets of the disciplines involved, he places a special emphasis on the keystone for success – the engagement of people.

His vehicles for change and delivering the promises of Operational Excellence include the:

How to manage strategic change